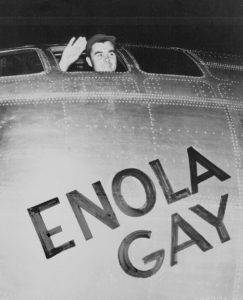 The plane was called the Enola Gay, named after the mother of the bomber’s commanding officer, Col. Paul Tibbetts. The place was Hiroshima. The atomic bomb killed many thousands of Japanese civilians — quite literally in a flash of light, heat and unimaginable concussive force.

Aug. 6, 1945 has gone down in history as arguably the most compelling moment of the 20th century. American air power would drop another atomic bomb three days later on Nagasaki, Japan. The Japanese would surrender a few days after that and World War II would come to an end.

The debate has raged for seven decades: Should we have dropped the bomb? Did we have to kill so many Japanese civilians? Would the Japanese have surrendered without having to suffer such horrific destruction?

I have some proverbial skin in that argument. A young man was stationed in The Philippines when the bombs fell on Japan. He was serving in the U.S. Navy and well could have taken part in the invasion of Japan had it occurred. We also well might have died in the effort, denying him the chance to return home and start a family that resulted in, well, yours truly being born.

Dad made it home from that terrible war, got married and produced his family. I wrote four years ago about how the Hiroshima decision remains quite personal:

Hiroshima gets personal with me

President Harry Truman had been in office only since April 1945; he assumed the power of the presidency upon the death of President Franklin Roosevelt. He only learned about the A-bomb development after he had taken the oath.

The newly minted commander in chief was handed some information that could have shortened the war by weeks, maybe months. Yes, the option before him would cost a lot of Japanese lives and he knew that at the top. He had to make a stern choice: Do I deploy this weapon knowing the destruction it will bring to the enemy’s homeland or do I risk sending our young men into battle at the cost of many thousands of American lives?

The president knew the consequences of the choice he had to make.

In my mind — and in my heart and gut — the president made the correct call. I cannot be objective or analytical about this. It’s personal, man.

I posted earlier today a blog item about how Franklin Roosevelt’s death changed the vice presidency for the better.

Vice President Harry Truman became president upon FDR’s death in April 1945. He took office, asked his Cabinet to pray for him and then set about finishing off the Axis Powers as World War II came to an end. Nazi Germany surrendered just about three weeks after FDR’s death. The Pacific combat remained to be fought.

But he knew next to nothing about the secrets that FDR took with him to the grave. One of them involved the Manhattan Project. Imagine the conversation taking place between Secretary of War Henry Stimson and the president of the United States.

Stimson: Uh, Mr. President? I’ve got something to discuss with you.

Truman: Sure, Henry. What is it?

Truman: Bomb? We’ve got all kinds of bombs. We dropped them by the thousands every day in Europe and we’re still doing so in the Pacific.

Stimson: But Mr. President, this bomb is a big one. Really, really big. It’s an atomic bomb. I mean, when it explodes, it registers enough firepower to equal several thousand pounds of dynamite.

Truman: Holy s***, Henry. One bomb equals all that power?

Stimson: Yes sir. We’re going to detonate one of them in July out in Alamogordo. It’ll be the first one. If it works, we’re going to propose something quite dramatic.

Stimson: We think we ought to use it on Japan. Send them a message that if they keep fighting we’ll use it again and again. Mr. President, we don’t think the Japanese will have the stomach for many of these.

Truman: OK, Henry, we’ll wait to see how the test blast goes and then we’ll make that call.

The test went off successfully. Less than a month later, President Truman issued the order to bomb Hiroshima. The Enola Gay took off on Aug. 6. Three days later, Nagasaki was demolished by the second A-bomb — and the rest is history.

You hear this on occasion from conservative critics of President Obama.

The president “had nothing to do” with the killing of 9/11 terror attack mastermind Osama bin Laden.

Fox News’s Bill O’Reilly repeated the preposterous notion this week on an edition of his “O’Reilly Factor” talk show.

I’ve heard it from others on the right, many of them right here in the Texas Panhandle, where the president is about as popular as … oh, let’s see, bin Laden.

O’Reilly said the Navy SEALs had everything to do with killing bin Laden in May 2011. Well, yes they did. The brave men risked everything by flying into Pakistan on a moonless night, landing their helicopters in bin Laden’s compound, looking for bin Laden, finding him, killing him and then hauling his corpse out of there.

However, to say that a commander in chief who issues the order “had nothing to do” with its success ignores the truth of what would have happened had the mission failed.

Did President Carter have “nothing to do” with the mission to rescue the Iran hostages in April 1980, the one that failed, costing eight American lives in the middle of the desert? He wasn’t at the controls of any of the helicopters that crashed. But he certainly got the blame — chiefly from those on the right — for the mission’s failure.

Did President Truman have “nothing to do” with ending World War II when he issued the order to drop the atomic bombs on Hiroshima and Nagasaki? What if the Enola Gay B-29 bomber had crashed on its flight over Japan? Give ‘Em Hell Harry would have caught plenty of hell himself.

This ridiculous notion that presidents don’t risk enormous political capital when they make these difficult decisions is the stuff of nonsense.

Barack Obama had to weigh the risks of sending in the commandoes when he ordered the hit on bin Laden. He could have ordered air strikes that could have killed innocent civilians. He didn’t. He could have passed, deciding the risk was too great. He didn’t do that, either.

The president did what presidents get paid to do. He made the difficult call.

Thus, he, too, had everything to do with the success of the raid to kill Osama bin Laden.

Allow me this bit of personal reflection on what arguably may be the most globally significant event of the 20th century.

President Harry Truman ordered the dropping of a very large bomb on a Japanese city 68 years ago this week. It was on Aug. 6, 1945 that a long-range B-29 bomber nicknamed the “Enola Gay” took off from a small Pacific island and headed for Japan. The Enola Gay, named after the mother of the plane’s pilot, Col. Paul Tibbitts, dropped a single bomb on Hiroshima. It killed tens of thousands of people instantly. It sent a clear message to the Japanese Empire: We’ve got this great weapon and we aren’t afraid to use it.

The president ordered another atomic bomb mission three days later. It caused similar devastation damage to Nagasaki, Japan. Five days after that, the Japanese surrendered. And on Sept. 2, 1945, U.S. Army Gen. Douglas MacArthur — who commanded all Allied forces in the Pacific — accepted the signed documents in Tokyo Harbor that ended World War II.

Why am I so interested in all of this? Why the personal stake?

My late father was serving in the U.S. Navy at that very moment in history. Pete Kanelis was a boatswain’s mate stationed in the Philippines. I do not know precisely what he would have done when the inevitable invasion of Japan would occur, but he would have been a part of what virtually everyone in America believed would be the bloodiest battle imaginable to secure a final victory.

Dad had been through hell already in another combat theater, in the Mediterranean Sea. He had taken part in three invasions: North Africa, Sicily and Italy. He had endured during one stretch 105 consecutive days of aerial bombardment from German and Italian aircraft. When they sounded general quarters aboard ship, Dad would strap himself into a 3-inch/50-calibre gun. Dad recorded at least one kill firing that weapon, a German JU-88 medium-range bomber he shot out of the sky.

Dad’s luck ran out, though, when an Italian dive bomber sank his ship. Dad dived into the drink, where he treaded water before a British destroyer picked him up.

After that, Dad came back to the States for a time, and then was deployed to the Pacific Theater.

He didn’t talk too much about those experiences. He would respond when I asked him but he didn’t volunteer this history of himself.

The tide of battle had turned in the Pacific by the time Dad got there. It was just a matter of time before our forces would win that war. But the president, brand new in the office after the death of President Franklin Roosevelt in April 1945, learned of this frightening way to end the war more quickly. The atomic bomb had been exploded successfully in July 1945 near Las Cruces, N.M. The brass presented the president with the option of dropping one of those bombs on the Japanese.

Truman’s decision — based on what he knew at the time — was the right one. Second-guessers have questioned the wisdom of that decision, but they — unlike the president and his national security team at the time — have the wisdom of hindsight. Truman knew he had to something to end the bloodshed and in his mind, this terrible weapon was the best option available to him.

The Japanese knew immediately after the two weapons fell on them that their effort was doomed. So, rather than risking perhaps millions of Japanese and American lives in a futile fight, they surrendered.

One of those American victims could well have been my father. Thus, you see why I am grateful for President Truman’s courage.

The president well could have saved my father’s life and, as they say, allowed me to be here today to write about it.