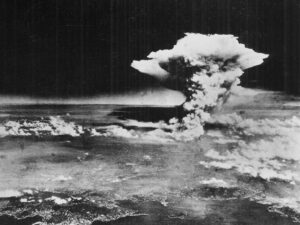 The world changed forever 75 years ago to this very day.

That was when a B-29 bomber took off from Tinian Island in the Pacific Ocean and dropped a single explosive device on Hiroshima, Japan. In an instant, tens of thousands of people were vaporized; many thousands more would die from the effects of that nuclear blast.

The nation was involved in a world war with Japan. Another airplane would take off three days later and inflict the same level of destruction on Nagasaki, Japan. A week after that second blast, the Japanese surrendered. World War II was over.

They danced in the streets of this country. A few days after surrendering, Japanese and Allied officials met in Tokyo harbor to sign the documents.

We look back on this day with grimness. It’s not a moment to celebrate. It is an event to commemorate with somber reflection. I am not particularly proud to have been born in the only nation on Earth to have used nuclear weapons in war. Indeed, it is a grim reminder of the path we took to reach that moment.

We had been fighting Japan, Nazi Germany and (until 1943) fascist Italy since 1941. Then in April 1945, our commander in chief, President Roosevelt, died in Georgia and suddenly, a modest man from Missouri, Harry Truman, was thrust into the role of president.

He didn’t know about the atomic weapon being developed in New Mexico until someone from the Joint Chiefs of Staff told him about this new weapon that could end the war quickly. President Truman weighed the cost of unleashing this device against the cost of invading Japan; he chose to use the bomb.

I have long embraced President Truman’s decision. Why? I had skin in that game. You see, my father was in the Philippines when Hiroshima and Nagasaki were incinerated. He was a proud Navy sailor who might have taken part in that invasion of Japan had the order been given and, yes, he could have died in that effort. He had survived intense combat in The Med and likely figured he was living on borrowed time.

So, you must understand that President Truman’s decision allowed me to be born into this world.

Do I celebrate those twin events? Do I perform a happy dance just knowing a wartime president’s resolve allowed me to enter this world? I do none of that.

I merely want to echo the refrain we have heard in the decades since that fateful event: Never again.

Allow me this bit of personal reflection on what arguably may be the most globally significant event of the 20th century.

President Harry Truman ordered the dropping of a very large bomb on a Japanese city 68 years ago this week. It was on Aug. 6, 1945 that a long-range B-29 bomber nicknamed the “Enola Gay” took off from a small Pacific island and headed for Japan. The Enola Gay, named after the mother of the plane’s pilot, Col. Paul Tibbitts, dropped a single bomb on Hiroshima. It killed tens of thousands of people instantly. It sent a clear message to the Japanese Empire: We’ve got this great weapon and we aren’t afraid to use it.

The president ordered another atomic bomb mission three days later. It caused similar devastation damage to Nagasaki, Japan. Five days after that, the Japanese surrendered. And on Sept. 2, 1945, U.S. Army Gen. Douglas MacArthur — who commanded all Allied forces in the Pacific — accepted the signed documents in Tokyo Harbor that ended World War II.

Why am I so interested in all of this? Why the personal stake?

My late father was serving in the U.S. Navy at that very moment in history. Pete Kanelis was a boatswain’s mate stationed in the Philippines. I do not know precisely what he would have done when the inevitable invasion of Japan would occur, but he would have been a part of what virtually everyone in America believed would be the bloodiest battle imaginable to secure a final victory.

Dad had been through hell already in another combat theater, in the Mediterranean Sea. He had taken part in three invasions: North Africa, Sicily and Italy. He had endured during one stretch 105 consecutive days of aerial bombardment from German and Italian aircraft. When they sounded general quarters aboard ship, Dad would strap himself into a 3-inch/50-calibre gun. Dad recorded at least one kill firing that weapon, a German JU-88 medium-range bomber he shot out of the sky.

Dad’s luck ran out, though, when an Italian dive bomber sank his ship. Dad dived into the drink, where he treaded water before a British destroyer picked him up.

After that, Dad came back to the States for a time, and then was deployed to the Pacific Theater.

He didn’t talk too much about those experiences. He would respond when I asked him but he didn’t volunteer this history of himself.

The tide of battle had turned in the Pacific by the time Dad got there. It was just a matter of time before our forces would win that war. But the president, brand new in the office after the death of President Franklin Roosevelt in April 1945, learned of this frightening way to end the war more quickly. The atomic bomb had been exploded successfully in July 1945 near Las Cruces, N.M. The brass presented the president with the option of dropping one of those bombs on the Japanese.

Truman’s decision — based on what he knew at the time — was the right one. Second-guessers have questioned the wisdom of that decision, but they — unlike the president and his national security team at the time — have the wisdom of hindsight. Truman knew he had to something to end the bloodshed and in his mind, this terrible weapon was the best option available to him.

The Japanese knew immediately after the two weapons fell on them that their effort was doomed. So, rather than risking perhaps millions of Japanese and American lives in a futile fight, they surrendered.

One of those American victims could well have been my father. Thus, you see why I am grateful for President Truman’s courage.

The president well could have saved my father’s life and, as they say, allowed me to be here today to write about it.