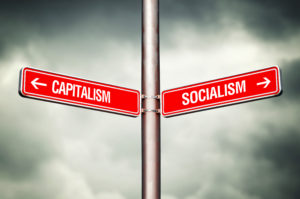 Donald J. Trump stood before a joint congressional session and received his share of cheers — mostly from Republicans sitting in front of him — during his State of the Union speech.

One applause line deserves a brief comment here. He declared, without an ounce of equivocation, that the United States is never going to become a “socialist nation.”

GOP lawmakers stood and cheered. So did a handful of Democrats.

Why mention this here? Because the president of the United States only revealed his acute command of the obvious.

He was taking a direct shot at one member of the Senate, Vermont independent Bernie Sanders. He also was targeting a handful of House Democrats, too, namely the rookie lawmaker, Alexandria Ocasio-Cortez, who has become a media superstar while serving for an entire month in the House of Representatives.

Is the president’s declaration actually intended to stave off some hidden stampede toward socialism? He clearly intends with that statement to stoke some kind of made-up fear that there is enough support in Congress to allow for a government takeover of heavy industry. He is breeding panic among those who believe that the United States of America is going to forgo capitalism in favor of socialism.

Let’s catch our breath. There is no way in the world that the United States of America is going to adopt a socialistic economy.

The issues that some congressional progressives can be resolved without converting our economy from one that produces individual wealth to something that distributes wealth evenly among all 300 million-plus Americans.

“Medicare For All” is no more of a socialistic solution than, say, the original Medicare was when it was enacted in 1965. Or when Social Security became law in 1935. Yet lawmakers and, yes, the president insist that the Affordable Care Act — President Obama’s signature domestic policy initiative — marches the nation down the road toward socialism.

There remains a tremendous amount of individual wealth in this country. I happen to believe firmly that individual wealth will continue to flourish likely until the end of time — whenever that occurs! Socialism, as I understand the meaning of the concept, seeks to redistribute wealth through some nefarious government grab of individual assets.

Does anyone seriously believe that is going to happen? Ever?

If you believe it, then you likely have swilled the Kool-Aid dispensed by demagogues who flourish in a climate of fear. 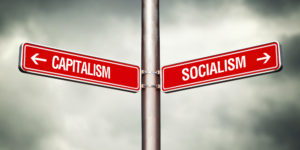 Socialism is the newest four-letter word we can add to our political glossary of epithets.

The problem with the word, though, and the way it is tossed around is that those who oppose socialism hang the label of “socialist” on folks for the wrong reasons.

They don’t know — or choose to ignore — the true definition of the word. Yet we hear it all … the … time! It comes from those on the right and the far right. It is meant to tear down the ideas of those with whom they disagree.

Socialism defines an economic system that spreads public assets around. Government takes over private industry and distributes assets to everyone the government represents. Here is one definition I found: a political and economic theory of social organization which advocates that the means of production, distribution, and exchange should be owned or regulated by the community as a whole.

I heard Donald Trump — yet again! — toss the s-word out there during a recent campaign rally. He said Democrats are not-so-closeted socialists who want to destroy our way of life, our economic system, our prosperity. He and his allies contend — and they are largely, but not entirely correct — that socialism doesn’t work.

I have been accused of being a socialist by readers of High Plains Blogger. They make me laugh. For starters, I’ve never posted an entry on this blog that espouses the economic benefit of a socialistic society.

Why is that? I am not a socialist! I am as much of a capitalist as any of my friends who happen to oppose the views expressed in this blog.

I have not endorsed the idea of Medicare for all, or a single-payer health care system, and I damn sure haven’t endorsed the notion of the government nationalizing heavy industry.

We hear critics of those who tilt left accuse them of being socialists, of wanting the government to do everything. They say we lefties are in favor of creating something called a Nanny State.

Socialism — and those who believe in it — have become a convenient political rallying cry at right-wing rallies. Hey, whatever works, right? It’s working for those level these accusations against those who oppose them.

It damn sure is working for the president of the United States, who got elected by stirring up fears and anxiety of voters in precisely the right states to win an Electoral College majority in 2016.

Stoking those fears and leading the cheers of those who believe this nonsense is no way to govern. 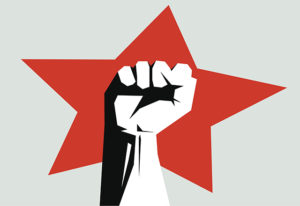 I’ve been called out by a critic of High Plains Blogger.

Some fellow who I don’t know, but who reads my blog regularly, has called me a “socialist.” He likens me to U.S. House Minority Leader Nancy Pelosi and U.S. Senate Minority Leader Charles Schumer as a socialist in their ilk.

Hmm. I need to respond to this guy.

I’ll start with this: He doesn’t know what a socialist is. A socialist is someone who believes in, um, socialism. And what is that, precisely?

To that end, I am as much of a capitalist as this fellow who purports to know — beyond a shadow of a doubt — that I am a true-blue, dyed-in-the-wool socialist.

I tend to avoid getting involved in these tit-for-tat responses on social media. For starters, many of High Plains Blogger’s critics tend to suffer from last word-itis. They have to get the last word on any exchange. So, I concede the last word to them. I’ll make whatever point I want to make, let ’em respond and then I move on.

As for the socialist rap, this individual hung that label on me after a blog post that didn’t discuss economic policy at all!

I believe, therefore, many of those who hang the “socialist” tag on folks such as yours truly are using the word as  cudgel to beat others up whenever they disagree with them on any policy at all.

To call someone a “socialist” is akin to saying “your mother wears combat boots.”

When in doubt, I rely on my tattered American Heritage dictionary, which describes socialism this way: “A social system in which the means of producing and distributing goods are owned collectively and political power is exercised by the whole community.”

Update: I thought for a moment I had been hallucinating earlier today when I noticed the price of gasoline had jumped 20 cents per gallon during the night. But nope. I saw it.

Then I noticed a competing convenience store chain had kept its prices the same as the day before, $2.79 per gallon of unleaded gasoline. Lo and behold, the two stations I noticed the big jump had rolled the price back to $2.79 during the day, and then dropped the per-gallon price a penny more by the end of the day.

Could there have been, shall we say, a gasoline pump trial balloon sent aloft this morning?

A mystery of economics has been made even more mysterious as of this very morning.

While completing an errand a few minutes ago, I noticed the price of regular unleaded gasoline jumped 20 cents per gallon overnight.

It’s still under $3, but it’s now at $2.99 at one local gasoline station. It’s a local chain, so I’m betting I’ll see a similar spike at other corner gasoline stations later this morning when I trudge off to work.

The mystery is this: I keep reading stories in the media about the plummeting price of crude oil and the accompanying decline of gasoline — which is a product of aforementioned crude oil. Then I witness this upward spike in prices here in West Texas, which supposedly is one of the centers of the domestic oil production boom that I thought was helping drive the price of energy down.

What in the world am I missing here?

I get the supply-and-demand drivers that fuel the economy.

News reports keep telling us that our supply is outstripping our demand. Production is up, demand is down. Thus, prices are supposed to come down. Isn’t that how capitalism works? It’s kind of basic.

Now the price of gasoline here in Amarillo, Texas, has shot back up — by a lot!

It’ll take some time for the price to trickle back down. That’s how it works. What jumps up quickly comes down at a snail’s pace.

I’ll be waiting and watching.