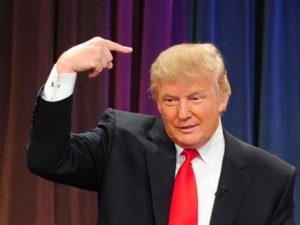 Donald Trump’s self-obsession, his uncontrollable urge to take credit for everything and to toss aside blame for anything, simply affirms what some of us have said since the moment this guy declared his candidacy for president of the United States.

His entire adult life has been calibrated for self-enrichment, self-aggrandizement, self-promotion.

The president issued some kind of statement over the weekend about the things for which he is grateful. Did he mention the blessing that have come his way? Did he talk about his family? Did he speak to the liberties we enjoy as Americans? No. He spoke to the “tremendous difference” he has made on the nation.

He was delivering remarks at a recent White House ceremony in which he honored several Americans with the Presidential Medal of Freedom. The president just couldn’t resist taking personal credit for the nation’s stellar economic performance.

He gives himself an A+ grade as the first half of his term approaches.

Time and time again — and I cannot even think of all the instances he’s done this — Donald Trump turns everything inward. He internalizes every single thing he deems to be a positive development.

I have been saying since the moment he began his political career — which commenced on that escalator ride in Trump Tower when he announced his candidacy — that Donald Trump’s entire life has been geared toward his own enrichment. Public service is a totally foreign concept to this man. He’s been president for nearly two years and it’s still a foreign concept.

He cannot empathize with those who face nature’s wrath. He doesn’t appreciate the service others give to the nation. Trump doesn’t grasp the need for him to step forward as the nation’s consoler, a sort of lay pastor, someone who ministers to a nation in mourning.

Fires exploded in California and he blamed the state’s forest management policy. When a hurricane savaged Puerto Rico, the president said it wasn’t a “real tragedy” such as what happened in 2005 when Hurricane Katrina stormed ashore; then he got into a terrible feud with the mayor of San Juan.

It’s all about Trump. All the time.

Moreover, it is totally consistent with this individual’s life before he became a politician. Many of us saw it from the beginning of his campaign for the presidency and rejected it; others embraced this man and his self-aggrandizing nature.

What I cannot fathom is how those who embraced it then continue to do so now. 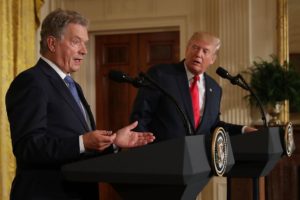 This is what I would call a gratuitous, needless lie by the president of the United States.

President Niinistö says the conversation never occurred. He did not, as Trump said, discuss a forest management policy that involves raking underbrush from forest floors to prevent wildfires.

What is it with this president of ours? Can’t he just keep his yap shut so as to avoid saying something that can be denied, disproved or discounted with a simple question to the other party he mentions?

The men met briefly in Paris, Niinistö said, adding that he did tell Trump that “we take care of our forests.”

That’s it, the Finnish president said. No discussion of raking underbrush.

The pile of lies is getting mighty tall. I realize this isn’t a big deal in and of itself. Still, it does reveal something terribly flawed about a president who cannot tell the truth if the future of Planet Earth depended on it.

Donald J. Trump toured the fire damage in California this weekend. He inspected the destroyed town of Paradise, talked with Gov. Jerry Brown and Gov.-elect Gavin Newsome. He offered words of encouragement and support to the firefighters and the victims.

Then he said Finland knows how to manage its forests. The Scandinavian country uses a lot of rakes and shoves to clear out underbrush, dead and dried-out foliage. It removes the fuel that ignites these killer fires.

Perfect! The president now has a jobs program he can institute in this country. Hire thousands of workers to pull duty in our national forests. Perhaps he can arrange to have federal grant funds sent to states that can hire folks to do the same kind of work on state land.

It can be kind of a 21st-century version of the enormous New Deal jobs program that President Roosevelt kicked off to counteract the Great Depression of the 1930s.

I am jesting, for sure. I only wish I could think the same thing about what the president said about Finland’s efforts to prevent wildfires on the scale of the blazes that have ravaged northern and southern California.

Rakes and shovels won’t do the job, Mr. President. The problem is far more serious and grievous than that.

“We have the best firefighters and first responders in the country working in some of the most difficult conditions imaginable. We’re putting everything we’ve got into the fight against these fires and this request ensures communities on the front lines get additional federal aid.” 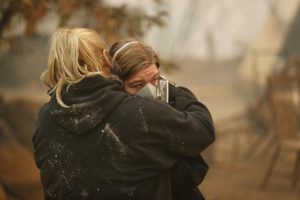 So said California Gov. Jerry Brown as he and his state government seek ways to quell the blazes that have destroyed towns, killed dozens of Californians and terrorized the residents of the nation’s most populous state.

Meanwhile, the president of the United States, whose duties include standing behind those fellow Americans who put themselves in harm’s way and to support those who are suffering, continues to rant and rail against what he calls “forest mismanagement.”

Donald Trump did soften his tone somewhat over the weekend. He signed a federal emergency relief order and disaster declaration that expedites aid to the stricken communities and he offered blessings to those who have suffered.

That all came after a storm of tweets and other public statements that criticized state forest management practices, which the president has blamed for the fires that are the deadliest in California history.

Fire departments from all over the country — including from throughout Texas — have dispatched personnel to California to give aid to their fellow firefighters. The fire service is a tight-knit community of men and women who always seek to have the backs of their brothers and sisters in harm’s way.

That sense of camaraderie should extend to the highest levels of government. It is missing in action. The president, who should have put the concerns of the victims and the firefighters who are risking their lives, first in his public response. He didn’t. He chose instead to level unfounded criticism. 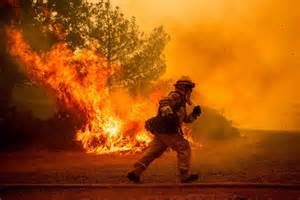 It is my sincere and heartfelt hope that the brave firefighters and residents throughout California understand this fundamental truth about Americans.

We are with you as you battle for your lives against the inferno that rages through your neighborhoods, destroys your homes and, most tragic of all, kills panicked residents.

Donald J. Trump has chosen to criticize what he describes as inadequate forest policies, blaming the fire on those policies and threatening to withhold federal emergency funds if state officials don’t reform them. Disgraceful, indeed.

Meanwhile, firefighters are risking their lives. Residents are losing their worldly possessions.

What’s more, firefighters from around the country are scurrying to the scene of the tragedy. Just this morning, we heard reports of North Texas fire departments dispatching firefighters to California to lend aid and assistance to their beleaguered comrades and to provide comfort to grief-stricken Americans.

I cannot say this enough nor can I say it loudly enough. We are watching acts of heroism playing out in real time, as it happens throughout the most populous state in America.

Godspeed to you all. 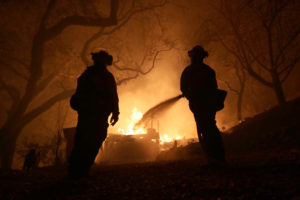 Nine people have died. Thousands of acres of land have been destroyed. Hundreds of homes have gone up in flames.

And the president of the United States shoots out a Twitter message that says:

“There is no reason for these massive, deadly and costly forest fires in California except that forest management is so poor. Billions of dollars are given each year, with so many lives lost, all because of gross mismanagement of the forests. Remedy now, or no more Fed payments!

Donald John Trump has a heart of stone. Wouldn’t you agree? Don’t answer that. There’s no need.

Once again we see the president lashing out instead of reaching out. Americans are suffering grievous loss of property and, yes, lives.

Why is that? Might it be that — hmm — the victims live in California, one of those “coastal enclaves” that voted in 2016 for Hillary Clinton over Trump?

Scott McLean, a spokesman for Cal Fire — which handles forest management — said of the president’s tweet, “It’s disappointing that he says these things.”

It sounds as if McLean is pulling his punches a bit. It is far more than merely “disappointing.” Donald Trump’s demonstration of heartlessness is disgraceful.

However, it’s the kind of reaction we have grown accustomed to hearing from the president of the United States. 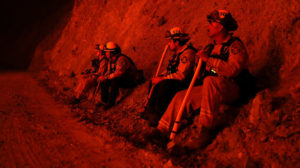 I never tire of saying good things about first responders.

They are battling fire that is ravaging much of northern California. At last count (that I have heard) eight people have died from the fire. One of the blazes, the Carr fire, is believed to be the largest wildfire in California history.

What really doesn’t get nearly the attention it deserves, though, when these tragedies occur is the inter-state cooperation that occurs among firefighting organizations. Sure, the media report on it; they mention on TV news broadcasts that fire crews have rushed to the aid of the local firefighters.

My wife and I got a  taste of just how extensive these inter-state efforts can get. We visited Grass Valley, Calif., a year ago on our way north to Portland. We parked our fifth wheel at the Nevada County Fairgrounds and became acquainted with firefighters who had encamped at the fairgrounds, which they used as a base camp from which they would confront the fires.

One of the senior firefighters told us fire crews had come from 12 states to assist the locals in battling the blazes that were terrorizing communities all over California.

Indeed, the Texas Panhandle — which also is susceptible to wildfire — earlier this summer welcomed fire crews from as far away as Oregon to assist crews battling the range fires that have blackened many thousands of acres.

These men and women are heroes in every sense of the word. They surrender their lives in the comfort of their own communities to assist their colleagues. They thrust themselves into harm’s way to protect human beings, livestock and pets from the merciless blaze.

Such heroism is presenting itself yet again out west.

All of these individuals deserve a nation’s prayers as they keep up the good fight against Mother Nature’s fury. 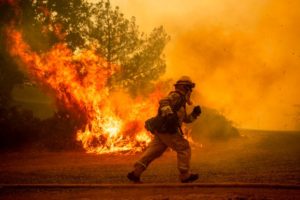 Donald Trump is a petulant president. Of that there can be no doubt.

The latest example of the president’s petty petulance reveals itself in the way he has reacted publicly to the deadly fires that are consuming hundreds of thousands of acres in California.

Would the president offer a highly public statement of support for the firefighters and other first responders? Or for the families that are being frightened by the fires or have lost all their possessions? Or the loved ones of the firemen who have died fighting to protect Californians?

Not yet, that I’ve heard.

He instead has issued a weird Twitter message in which he blames federal environmental rules that, according to Trump, have hampered firefighting efforts to quell the flames.

Trump lost California to Hillary Rodham Clinton in the 2016 election by roughly 4.3 million votes. He has been feuding with Democratic California Gov. Jerry Brown over environmental issues.

But the man who is president of all Americans — even those who oppose him — cannot yet bring himself to offer a soothing word of support for those who are suffering.