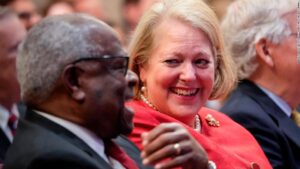 Ginni Thomas is entitled to believe whatever conspiratorial crap fills her seemingly vacuous noggin, such as the 2020 presidential election was stolen from Donald J. Trump.

We have no evidence of any such theft. Still, that’s reportedly what she told the House select committee examining the 1/6 insurrection.

Fine, lady. You believe whatever you wish.

However, she occupies an unusual place in the world of public figures. She’s not elected or appointed to any high-profile office. She is, though, married to someone who fits that bill: U.S. Supreme Court Justice Clarence Thomas.

Here is where Ginni Thomas’s denials of wrongdoing get a little sticky, not to mention stinky. She insisted to the committee that she and her husband don’t ever discuss politics at home. And yet, she would have anyone with half a noodle in their skull believe that she would ignore what she has told others that the 2020 election was the “greatest political heist” in U.S. history.

Is she going to have us believe she never has said anything to her best friend, the man to whom she’s been married for 35 years about what she believes is the greatest act of theft in the history of our nation?

I am not going to accept that Justice and Mrs. Thomas never have talked between themselves about her political life outside the walls of their home.

The issue came to the fore when Justice Thomas cast the lone dissenting vote as the court ruled that he had to turn over his presidential papers to the National Archives. Every other justice ruled that Trump had to cut them loose; not so, Clarence Thomas ruled.

I will stand by my earlier demands that Clarence Thomas resign from the court. He has no business ruling on matters related to the insurrection when he is married to someone who believes The Big Lie about alleged electoral thievery.

And I do not believe for a nanosecond that Ginni Thomas has never said a word about to the justice.