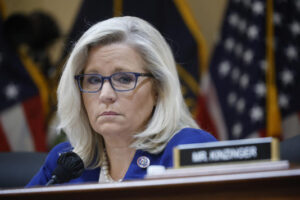 Liz Cheney is facing the fight of her political life on Tuesday and from all appearances, it’s a fight she is likely lose.

The Wyoming Republican congresswoman is being challenged by a candidate in the GOP primary who carries Donald J. Trump’s endorsement. The Trumpkin appears headed for victory in the primary.

Cheney is the final GOP member of Congress who voted to impeach Trump who will face an electorate angry over that vote. Most of the other nine Republicans who cast affirmative impeachment votes have fared poorly as well as they have sought re-election to Congress.

Am I going to shed a tear for Liz Cheney? Not really. I want her to win the Wyoming Republican primary. Not because of her staunch conservative voting record. Instead, because she has shown enormous fortitude in standing up to Trump’s lies, his quest for power, his flouting of the rule of law and his persistent retelling of The Big Lie about non-existent 2020 wide-spread voter fraud.

Something tells me, though, that even if Cheney loses the GOP primary in Wyoming that she is far from finishing her final act on the political stage.

I’ll just be left to condemn what has transpired in the Republican Party in this age of Trump, when lying, cheating and corruption become accepted behavior.