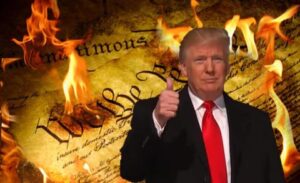 Let’s see if we can sort out what Donald Trump once said about those who invoke the Fifth Amendment, shall we?

While campaigning for the presidency in 2016, Trump said that only those with something to hide would cower behind the amendment that protects Americans against self-incrimination. If they’re guilty of something, they take the Fifth, he said.

The slathering faithful to whom he was speaking in ’16 would whoop, holler and applaud and start chanting “Lock her up!” while referring to his political opponent back then, Hillary Rodham Clinton.

We fast-forward to this week and Trump gets summoned to the New York attorney general’s office. What does the former Crook in Chief do? He invokes the Fifth Amendment more than 400 times!

Media reported he answered precisely one question: What is your full name?

Attorney General Leticia James is looking into allegations that Trump falsified his net worth to obtain favorable loans and to head off legal action taken against him. He exaggerated his worth for the former and low-balled his assets for the latter … allegedly!

Which is it? Is The Donald guilty of something? Does he have something to hide?

And to think that there are a substantial number of Americans out there would want to see the former Charlatan in Chief given access to the nation’s nuclear codes once again.