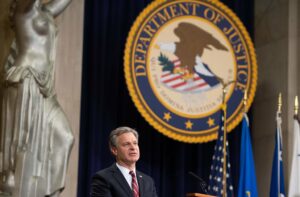 The irony in the partisan reaction to the FBI decision to search Donald Trump’s luxurious pad for documents he wasn’t supposed to take from the White House is just too rich to ignore.

There once was a time when Republicans were seen as belonging to the party of law and order. Yep, the GOP once cheered the cops’ efforts to root out crime. The party once took no prisoners. It said “hang ’em high.”

So, what’s happened in the day or two since the FBI search? Republicans are now accusing the feds of planting evidence. They accuse the FBI and the Justice Department of conspiring to make up a pretext to send the former president to jail in leg irons.

The FBI obtained a search warrant using legal means. It persuaded a federal judicial magistrate that it had “probable cause” to believe a crime had been committed. The judge issued the warrant. The G-men and women went to Trump’s glitzy joint and left with about a dozen boxes of documents.

Republicans formerly cheered the feds when they performed these duties. Now they have rallied behind a cult figure and are leveling preposterous allegations against the FBI.