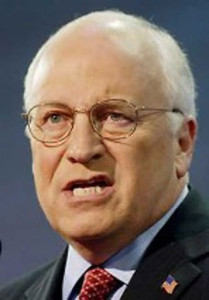 Wait for it. They will come in due course, if they haven’t already been pouring in at Liz Cheney’s congressional re-election campaign office.

Rep. Cheney’s father, former Vice President Dick Cheney, is featured in a political ad in which he calls Donald J. Trump the “greatest threat to democracy” in the nation’s history.

You know what’s coming next, right? There will be exclamations from the Trump cultists that Dick Cheney’s views don’t matter, and that he’s a Republican In Name Only. Yep, Daddy Dick Cheney is a RINO in the eyes of those who continue to coalesce around Donald Trump.

Dick Cheney proclaims his pride in his daughter Liz’s efforts to expose Trump as the crooked fraud that he is.

The elder Cheney is trying to get his daughter re-elected to the House seat from Wyoming, the very seat Dick Cheney occupied before he left Congress to become White House chief of staff for President Ford. He then served as defense secretary for President George H.W. Bush before being tapped to run as VP with “W.”

The thing is, Dick Cheney also is right when he calls Trump a “coward” because he lies to his supporters about the so-called theft of the 2020 presidential election. The former VP says, instead, that Trump is the electoral thief, seeking to reverse the results of an election he lost handily.

I haven’t cheered much for Dick Cheney ever since he coerced President George W. Bush into going to war with Iraq on the false claim that the Iraqis played a role in events of 9/11; they played no role!

However, the ad he has participated in on behalf of his daughter give me pause to offer some much-appreciated praise for the man once called “the shadow president” during the two terms of the Bush administration.

Will the ad turn the tables and breathe enough life into Cheney’s campaign to resurrect it? It’s not likely. Then again, we ought to consider tossing the conventional political playbook into the crapper.