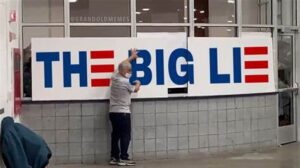 Here is a statement from the Texas Republican Party, the dominant political organization in a state that comprises 29 million residents and drives a world-class economic engine.

“We reject the certified results of the 2020 presidential election, and we hold that acting President Joseph Robinette Biden Jr. was not legitimately elected by the people of the United States.”

OK! I’ve already declared that the Texas GOP has gone bonkers. Its leadership is certifiably crazy.

I just want to reiterate that The Big Lie as regurgitated by the Texas Republican Party is a poisonous dose of rhetoric that does absolutely nothing but harm our cherished democratic process.

For the Texas Republican Party to swallow that snake oil — to my mind — is too damn close to sedition for comfort.