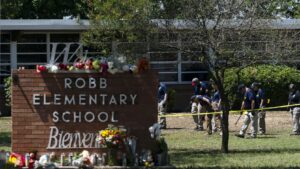 Uvalde’s community of teachers, students and their loved ones and friends are demanding answers from the police who so far are acting as if they have many things to hide.

This is a travesty that needs instant repair.

The gunman who walked into Robb Elementary School and killed 21 children and teachers did so with apparent ease. Why in the name of truth and justice aren’t the cops telling us the whole truth about what wend down a month ago in that tightly knit South Texas community?

The Uvalde school district chief of police Pete Arredondo is on administrative leave. From where I sit, he needs to be fired. Department of Public Safety director Stephen McCraw is only a little more forthcoming, but he, too, is holding back. The Uvalde Police Department also has a dog in this fight, but where are UPD’s statements of clarification?

This outrage has gone on long enough!

The community is grieving. So is the rest of the state and the nation. We are getting some legislative help in the form of congressional action aimed at stemming the violence. It’s not enough, but it’s a start.

I want to offer a snippet from the Dallas Morning News editorial that states: The families of the victims and every Texan deserve better from law enforcement agencies and politicians whose prime responsibility is to serve the public interest, not their own. The common public interest must be to determine how and why so many died when faster action in line with nationally accepted active shooter protocols would have saved lives.

Uvalde was an ‘abject failure,’ but there’s more to the story (dallasnews.com)

The cops sign on to “protect and serve.” They offered little protection for those 19 children and the two teachers who died in that massacre. They are derelict in their service to the state that is demanding answers to what created what has been called “an abject failure.”