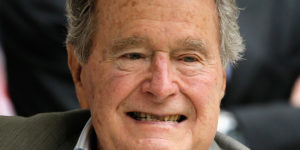 A long time ago, a young Texas congressman served the Houston area. He was famously friendly to organizations that favored women’s reproductive rights.

George H.W. Bush served in Congress for two terms, from 1967 to 1969. He voted routinely in favor of spending bills to pay for those programs now demonized by the right wing of his Republican Party.

Rep. Bush developed — as I understand it — a nickname in the House. His colleagues referred to him as “Rubbers.”

He left Congress and served as CIA director, head of the Republican National Committee, special envoy to China and as U.S. ambassador to the United Nations.

Then along came Ronald Reagan in 1980. “Rubbers” Bush ran against Reagan for the GOP presidential party. Reagan won the nomination and looked for a VP running mate.

He chose George Bush … who then underwent a remarkable political transformation. The instant he accepted Reagan’s invitation to join him on the GOP ticket, “Rubbers” became a fervently pro-life candidate.

The Reagan-Bush ticket won that year. The rest is history.  I hasten to add that as a presidential candidate in 1988, Bush did not wave the pro-life banner with undue vigor; nor did he do so when he ran for re-election in 1992.

I point all this out to remind us all that abortion and women’s reproductive rights long has been among the most toxic issues imaginable. The Supreme Court ruling that strikes down a woman’s right to obtain a legal abortion only fans those embers into a full-blown fire.