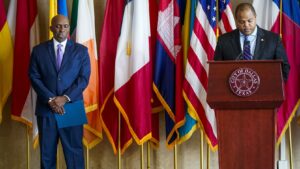 T.C. Broadnax seemed to be a sort of Dead Man Walking at Dallas City Hall.

There was supposed to be a City Council meeting in which Broadnax would get booted out. The meeting didn’t happen. Then suddenly, without warning, Broadnax and Johnson kinda made peace.

At least for now.

I live just up the highway from Big D. I worked briefly for the Dallas Morning News at the end of 2021, so I developed a bit of understanding — but only a bit — of what was transpiring at City Hall. It looked pretty ugly from my standpoint.

Mayor Johnson seemed to make a hash out of the situation. The way I saw it play out, Broadnax had every reason to be embarrassed over the way he was treated.

Yeah, I know that running a major American city such as Dallas puts every senior administrator under the hottest of lights. The city has been through a lot of turmoil just in the three years we have lived in the city’s significant shadow.

The police chief resigned amid a violent crime wave. Crime continues to plague the city. Dallas reportedly has a permit problem that Broadnax cannot seem to repair, which also irked Johnson.

I don’t know how this is going to play out.

If I were T.C. Broadnax, I believe I would polish up my resume and get it ready to present to other potential employers. He ought to do it secretly. Why? Because Mayor Johnson seems to be unable or unwilling to avoid making a show out of sensitive personnel matters.