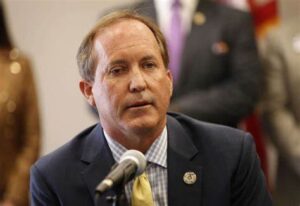 Texas Attorney General Ken Paxton, the indicted statewide elected official seeking re-election to a third term, has decided to go after his Republican Party primary runoff opponent using what I consider to be an odd tactic.

Land Commissioner George P. Bush is too “liberal” to be elected AG, the pro-Paxton TV ad says. A Texas pol named “Bush” — the nephew and grandson of two presidents of the United States — is too liberal? What a joke!

What’s curious is that the ad doesn’t mention Ken Paxton’s name. The ad is paid for by some political action committee that is supporting Paxton. But one doesn’t know the AG’s name if one relies only on the ad to make a determination on to whom to vote in the GOP runoff.

Hmm. It spurred my thought process. Why won’t the group divulge the name of the guy it is supporting?

I figure it’s because Ken Paxton’s “brand” is so sullied by the indictment, handed down in 2015 right after Paxton took office that it doesn’t want to remind Texas Republicans that they have an alleged crook running the state’s AG office.

A Collin County grand jury indicted Paxton on a charge of securities fraud. Through a series of delays and legal mumbo-jumbo the case still hasn’t gone to trial. Last I heard Paxton’s now supposed to stand trial in Collin County. The case has been tossed back and forth between Harris and Collin counties. What’s more, the FBI is investigation allegations of illegal activity in his office.

The guy actually should resign from the AG’s office. Now that he’s still running for re-election, I am left to wonder why the stern ad blasting George P.  Bush makes no mention of the guy the buyers of the ad are supporting.

I believe something is seriously wrong the Paxton brand.