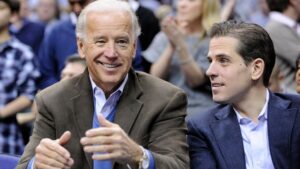 The right-wing goon squad that is on the hunt for evil intent involving President Biden and his son, Hunter, are going to stop at nothing to concoct some nefarious plot that — as I look at it — defies logic.

Hunter Biden went to work years ago for a Ukrainian energy company, serving on the board and raking in a lot of dough for doing, allegedly, nothing to earn it. I get that it doesn’t look good for someone to trade on his famous parent’s name for considerable profit. Hey, it happens; e.g.: Donald Jr. and Eric Trump.

What about dear ol’ Dad, though? Are we supposed to believe that a man who has spent virtually his entire adult professional life in public service is going to throw it all away with an obviously careless and corrupt practice? The right-wingers want us to believe that President Biden himself profited from Hunter’s association with the energy firm.

Yes, that the president of the United States of America hauled in cash and fattened his own bank account. How does someone with half a brain even think he can get away with such a thing when the public is watching his every move?

Joe Biden served for eight years as vice president in the Barack Obama administration. Prior to being elected VP, he served for 36 years as a U.S. senator from Delaware. Prior to that, Biden served on a county council as a Democratic representative.

I did the math: That’s 52 years of public service.

And yet the right-wingers want us to believe that a man who’s been under the public’s prying eyes would be stupid enough to take money while his son is working as a board member for a foreign-based energy firm.

One more point. During the first impeachment inquiry into Donald Trump’s quest for a political favor from Ukraine, a prosecutor in that country declared categorically that neither Joe nor Hunter Biden committed any crimes.

Still, the hunt goes on. To what end? To seek to destroy the career of the man who defeated Donald Trump.