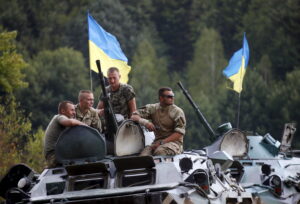 When the Russians invaded Ukraine I was skeptical that the Ukrainians would be able to declare victory on the battlefield. The Russian army was numerically and technically superior to Ukraine.

Then the Russians discovered something in real time on the field of battle. The first thing, apparently, was that they weren’t as fearsome a fighting force as they — or many of the rest of us — thought they were. The second thing is that they likely underestimated the Ukrainians’ will to fight to protect their homeland against a foreign invader.

What astounds me is that the Russians’ misjudgment of Ukraine’s will to fight would exist at all, given their own country’s military history.

In June 1941, Adolf Hitler launched the invasion of the Soviet Union. He likely didn’t think the Russians would fight to the death in the manner that they did. The Red Army then turned the tide against Hitler’s forces in a city once known as Stalingrad. Let us not forget that Ukrainians were fighting alongside Russians in their struggle against the Nazi invaders. Oh … the irony.

This is what happens when a nation invades another sovereign state. They learn that their adversary is committed to the struggle to survive and their commitment well could carry them forward against a supposedly superior military force.

We hear now several things are going badly for the Russians. They have lost several field generals in the battle; the Russian troops are suffering from low morale; Russian soldiers aren’t obeying officers’ orders; Ukraine is getting plenty of help from allied nations — such as the United States; the Ukrainians are putting their military hardware to good use.

Don’t get me wrong here. I am not about to declare that Ukraine will declare victory and that Russia is going to skulk off the battlefield. There likely will be much more struggle to take place.

It does make me wonder how much more humiliation Russian despot Vladimir Putin can take. Moreover, I will stand on my belief that Putin is not stupid enough to launch a nuclear strike, given his knowledge of how “mutually assured destruction” would play out.

If there is an exit to be found, my strongest hope is that Putin can look for it and get the hell out of Ukraine. I wouldn’t even mind if he decides to declare victory. Let him crow all he wants. The world will know better.