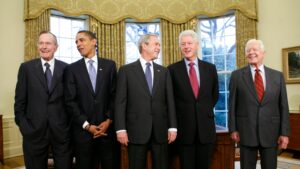 Presidential custom is a big part of the nation’s highest office, particularly when the occupants of that office depart.

One of those customs is to see former POTUSes lock arms for common causes. Presidents Clinton, Bush and Obama recently did a public service announcement seeking to rally the nation against the COVID pandemic. I saw the ad and wondered — get ready for it — where was Donald Trump? I mean, the pandemic exploded on Trump’s watch!

We see these kinds of dramas play out from time to time.

The same can be said of former first ladies. Michelle Obama and Laura Bush have shared the spotlight to talk about their time in the White House. Melania Trump? She, too, has been absent from any sort of public appearances with her colleagues.

Donald Trump left office an angry and bitter individual. His animus toward President Biden remains visceral. Same for how he explodes at the mention of Barack Obama’s name, or George W. Bush, or Bill Clinton.

We once boasted in this country about how presidencies transfer from one to another, across party lines, and without rancor. We once referred to the “seamless transition of power.” It wasn’t that way when Donald Trump lost to Joe Biden in 2020. We are still feeling the pain of that horrible hand-off from one administration to the next one.

Along the way, we are watching feel-good presidential customs torn apart. What an utter shame.