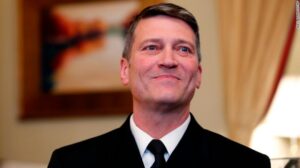 A strange thing has occurred — or it’s still occurring — as I continue to offer comment on a member of the Texas congressional delegation.

Republican Ronny Jackson represents the 13th District in the Texas Panhandle, where I lived for 23 years before my bride and I relocated in 2018 to the Metroplex.

I had been a bit hesitant to keep yapping about this right-wing blowhard. I mean, he was their congressman. I had my own right-winger — Van Taylor — to keep me occupied. Taylor, though, had a months-long affair with the former wife of an Islamic State officer, thus blowing a huge hole in his family-man image.

Well, Taylor is leaving Congress at the end of the year. Jackson is likely to be re-elected. He’s also becoming something of a national right-wing political figure, albeit for reasons that make my blood boil.

Jackson has become a darling of the right-wing media because he is so damn reckless, feckless and downtown stupid in his pronouncements about President Biden. He shows up on Fox News, on Newsmax and on One America Network to tell the audience that Biden is inept, incompetent and incoherent. The hosts nod approvingly and so Jackson goes on and on.

I believe he is nothing more than a right-wing dipsh**.

Ronny Jackson doesn’t know me from Adam. I only know of him through what I see on his Twitter feed and from reports of his appearances on the aforementioned right-wing media outlets.

Given that he has achieved some sort of national standing, though, I feel more comfortable telling readers of this blog what I think of his blathering.

I just want him to shut the hell up.