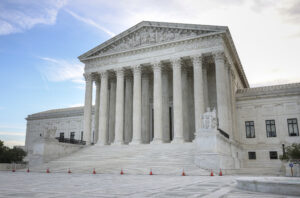 I am waiting with bated breath — yes, already! — for Senate Republicans to voice their opposition to whomever President Biden chooses to succeed Justice Stephen Breyer on the U.S. Supreme Court.

You see, we now will get to hear the objections as to why they oppose what the president promises will be a legal scholar of impeccable credentials; she will be someone with outstanding character; she will have unassailable legal credentials.

That won’t be enough to swing GOP senators over the right side of history as Joe Biden proceeds to find the first African American woman nominated for a spot on the nation’s highest court. Oh, no!

They will concoct reasons to oppose her. They will take whatever she might have said about something out of context, twist it into something no one can recognize and then declare that there is “no way” they can support such a “radical, left-leaning” lawyer to the Supreme Court.

I actually welcome that debate. Why? Because I want to know who the individuals are who cannot set their political bias aside while considering such an important choice for a lifetime appointment.

Oh, and be sure to stay alert to the accusation that Democrats in Congress and the president are somehow playing “politics” with this choice. Wait for it. That ridiculous canard is bound to surface.