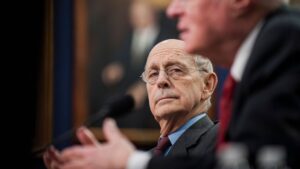 Stephen Breyer today made official what the world has known for, oh, the past 24 hours, that he is retiring from the U.S. Supreme Court at the end of the court’s term.

Now comes yet another stern test for President Biden: finding a nominee who will be seated quickly on the nation’s highest court.

The president has limited his field of choices dramatically by pledging to name an African American woman to succeed Justice Breyer. Allow me this bit of wisdom per the next nominee to join the court.

Of the names I have heard mentioned I am struck by the term “public defender” in the backgrounds of at least two prominent judges. The idea that a legal genius who has served as a public defender could join the nation’s highest appellate court is appealing in the extreme to me. One name appears to be the prohibitive favorite, as an article By Elaine Godfrey in The Atlantic has noted:

We know that his nominee will almost certainly be a woman. In 2020, then-candidate Biden vowed that he would respond to a Supreme Court opening by nominating a Black woman. Dozens of candidates are being talked about, but nearly all of the Court watchers I interviewed for this story have their money on one in particular: Ketanji Brown Jackson. 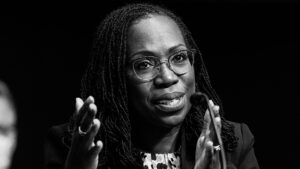 I believe someone with public defender experience in her legal background brings a totally new perspective to any judicial conference that would occur when the court is considering, for example, an appeal on a death penalty case; or perhaps an appeal on a conviction that someone believes was incorrectly achieved.

Could a Supreme Court associate justice soften the hard hearts of her colleagues? It’s possible. Then again, it might not. My point though is that a U.S. Supreme Court need not be populated only with jurists who come from, say, civil law or who have experience only as criminal prosecutors.

President Biden seemingly wants to broaden the scope of the Supreme Court’s world view. Go for it, Mr. President.