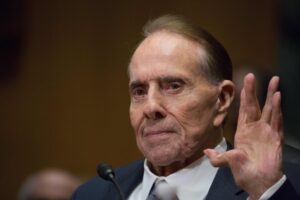 Robert Dole’s death has thrown me into the realm of recalling what another great American politician once referred to as a “kinder, gentler” time, when politics and politicians weren’t stained by hatred.

Dole died this past weekend at age 98. His death wasn’t a shock. We all knew it was coming soon. I mean, the man was nearly a century old and as they say, none of us gets out of here alive. He also had been ill with cancer, and I knew that, too.

Still, his passing reminds me of how politicians formerly conducted their business. They fought hard for their policies and their philosophy. Yet they managed somehow to maintain personal relationships with those with whom they fought while they were on the clock.

That seems to sum up the late Sen. Dole’s professional life.

One of the remarkable pieces of video I have seen since Dole’s death was of his accepting the Presidential Medal of Freedom from the man who just a few weeks earlier had defeated him in the 1996 presidential election. President Clinton draped the medal around Dole’s neck and the beaten Republican nominee stood for a moment, then said, “I, Robert J. Dole … do solemnly swear.” He brought the house down. Then he said, “Oops. Wrong speech.” He also told the still-laughing crowd that he expected President Clinton to “give me something” when he arrived at the White House, but that he had hoped it would be “the keys to the front door.”

Can you imagine (a) Joe Biden ever awarding the man he defeated for the presidency the nation’s highest civilian medal and (b) Donald Trump accepting it with the kind of class that Bob Dole did in receiving it from the man who defeated him for the office he coveted?

The Donald Trump Era in presidential politics ushered in a new age of extreme animus. Indeed, Sen. Dole exemplified the quality of men and women who once led this country. They did so with class and dignity, which drew praise from their foes, even as they continued to disagree over basic policy matters.

I am going to hold out hope — being the eternal optimist I am — that we can find our way back to the way it was. Meanwhile, I will offer a word of thanks to Sen. Dole for reminding us of the lessons he taught us about graciousness and class.