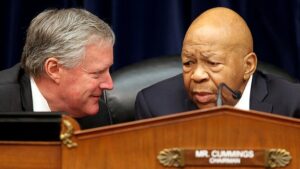 You can just imagine how unsurprised I am to hear the news that former Donald Trump White House chief of staff Mark Meadows is going to no longer cooperate with a congressional committee assigned to finding out the truth behind 1/6.

Tell me you’re surprised that Meadows has decided to clam up. If you do, I’ll call you a fool.

Meadows had revealed that he was cooperating “for now” with the House select committee appointed by Speaker Nancy Pelosi to root out the cause of the 1/6 insurrection/riot/coup attempt and to recommend ways to prevent it from happening ever again.

Now he’s backing away. He’s not going to provide the information the committee wants.

Meadows is a Trump toadie. A slathering sycophant. A babbling buffoon.

He also might find himself in jail, where he could join former White House policy guru Steve Bannon, who’s been indicted by the Justice Department for contempt of Congress. Bannon hasn’t yet been tried, but if he’s convicted, he faces a year in the slammer. Meadows might as well, too.

The entire world witnessed a hideous assault on our democracy on 1/6. The House panel, chaired by Bennie Thompson, D-Miss., is on a mission to find out what happened when Trump incited the crowd to attack Capitol Hill while officials were certifying the results of the 2020 presidential election.

Meadows knows more than he’s letting on. He needs to tell the truth. He vows to keep it from us. He needs to pay for his intransigence.