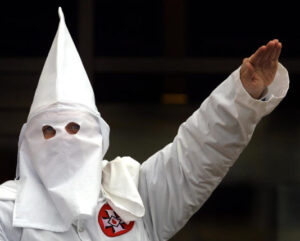 Ponder this image for just a moment and then ask yourself: Would you want this individual representing you at any level of government?

The picture you see is of Chester Doles, a former Ku Klux Klansman. He is running for a county commissioner’s seat in Georgia. That gesture he is making is a Nazi salute, you know, the “heil Hitler!” thing we see on occasion at Klan rallies or gatherings of assorted white supremacist hate groups.

Doles is running as a Republican. Big surprise, eh?

I am thinking at this very moment of my father, who 80 years ago on Dec. 7 went to the armed forces recruitment center in downtown Portland, Ore., to sign up to fight the tyrants who (a) were trying to take over the world and (b) earlier that day attacked us at Pearl Harbor, Hawaii.

Dad would be enraged at the thought of a dipsh** who flung out a Nazi salute running for any public office in the United States of America.

So should any conscientious American who knows what that salute represents. I get that the idiot ex-KKK’er has every right to express himself that way. It is prescribed in the Constitution that Dad and other patriots fought to protect during World War II.

Still, the expression shown here is as revolting and repulsive as any I can ever imagine.