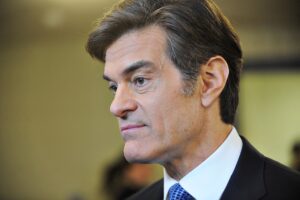 Mehmet Oz wants to be elected to the U.S. Senate from Pennsylvania in 2022, which by itself shouldn’t cause any great shakes for little ol’ me out here in North Texas.

Except that it kinda does. I now shall explain.

Oz is a medical doctor. He made a name for himself by becoming a TV personality. His face is everywhere. I cannot testify to the quality of his medical practice; for that matter, I don’t know if he even still has a practice where he examines patients and does doctor-related tasks.

He is running as a Republican. He also is a known skeptic of the COVID-19 virus’s seriousness. He also has been critical of the vaccines that have been released to vaccinate Americans against the virus. That qualifies Oz, in my view, as a certified member of the crackpot cabal of the GOP.

There’s one more thing I want to point out. I believe he borders on medical quackery. Why?

Well, some years ago I heard him shilling for a product that was supposed to cure people of some ailment. Then he dropped the word “miracle” in his description of the product. He said that the results were a “miracle,” meaning that there is no Earthly explanation for why it does what it does.

I am no doctor, but no doctor I ever have heard has used the word “miracle” to describe a scientific procedure. By its very nature, science is predicated on knowledge of cause and effect.

Thus, for a medical doctor to use a term such as “miracle” to describe a medicinal product to my mind smacks of someone who is peddling some version of snake oil.

This clown doesn’t belong in the U.S. Senate.