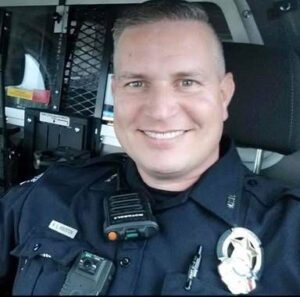 Richard Houston II went to work Friday expecting fully to return home at the end of his shift and be greeted by his wife and three children.

He didn’t get that opportunity.

Houston was a member of the Mesquite (Texas) Police Department, having served the PD for 21 years. He responded to a disturbance call Friday, where he encountered a man with a firearm. The man shot Houston before turning the weapon on himself; the suspect in the shooting is in the hospital suffering critical wounds.

Enough about that nimrod.

Richard Houston died serving the residents of his community. From what I understand, he is just the second officer to die in the line of duty in all of Mesquite’s history.

I have had a longstanding affection for police officers. There is absolutely nothing “routine” about any task they are called upon to perform. Every single day they suit up, strap on their gear and go to work is filled with potential danger every single moment of the shift they work. They are heroes in every sense of the too-often overused — and misused — term.

I want to pay a brief tribute to all the dedicated police officers who, just like Officer Houston, expect to go home to their loved ones at the end of their day. The Mesquite chief of police asks us all to keep Houston’s family in our prayers.