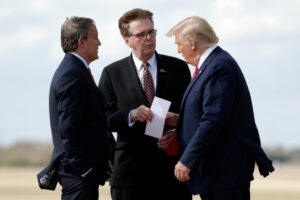 Texas Lt. Gov. Dan Patrick has affirmed for me why I generally do not give money to political candidates.

Campaign finance law allows them to spend it foolishly, as Patrick has just done by shelling out $25,000 to a Pennsylvania poll watcher who caught a single individual voting illegally in that state in 2020.

Patrick had promised to pay as much as $1 million to anyone who could prove “widespread voter fraud” in the 2020 election. He has sent just one check, though, totaling 25K to the poll watcher.

You see, there isn’t any “widespread vote fraud” to be found. Not in Texas. Not in Pennsylvania. Nowhere, man!

Which brings me back to my point. The money came from Patrick’s campaign stash. If I had given money to Patrick’s campaign, I would be damn angry that he is spending a dime of his campaign money for this kind of foolishness. It comes from the pockets of those who believe in a candidate.

It boggles my noggin to think that anyone who gave to this blowhard’s campaign would actually endorse his writing a check for a single case of someone voting illegally … in another state!