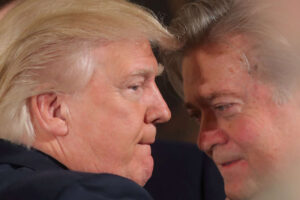 The issue goes to the full House. Then it goes to the U.S. attorney’s office in the District of Columbia. And then it falls on the Justice Department, led by Attorney General Merrick Garland, to pursue a criminal prosecution of  Bannon.

Oh, how I hope DOJ follows through.

The unanimous vote by the House panel is quite satisfying, given that two Republicans — Reps. Liz Cheney and Adam Kinzinger — serve with seven Democrats. So, it’s a bipartisan vote to charge Bannon with a criminal act.

The panel had summoned Bannon to testify. He refused, citing executive privilege. He and the former POTUS, though, weren’t meeting on 1/6 to discuss national public policy matters. They were meeting to ascertain how Donald Trump could overturn the 2020 presidential election, which Joe Biden won … bigly.

It’s going to pass through the full House. It then will head to DOJ.