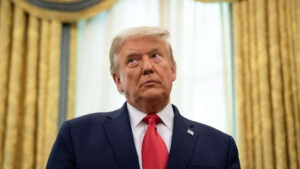 Some pundits/commentators/thinkers I respect a great deal are throwing a major scare into this old man’s body.

They are suggesting that at this moment Donald J. Trump is the “favorite” to be nominated by the Republican Party to run for president in 2024.

Let’s ponder that for just a brief moment.

The House of Representatives impeached him twice. The first time was for soliciting political favors from a foreign government; a clear violation of the law, not to mention the Constitution. The second time was for inciting an insurrection against the government as Congress sought to ratify the Electoral College returns from the 2020 presidential election; another clearly defined “high crime and misdemeanor.”

He skated twice because not enough Senate Republicans had enough courage to stand by their oaths of office and convict him.

The former POTUS has hijacked the GOP. He is holding it hostage to his whims and machinations. He is the man, the myth, the legend in his own mind.

He is making noises about wanting to run again.

If he does and if the GOP is flat-out stupid enough to nominate this clown once again — after all the damage he has inflicted on the government he once vowed to protect — then, ladies and gents, we are in far more trouble than I ever imagined.