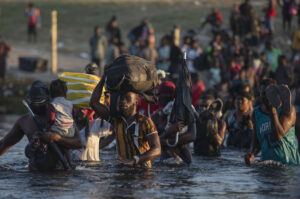 How many times do I have to say this: We do not have “open borders’?

That is the mantra being recited time and again by far right wing opponents of President Biden, who continue to insist that our borders — particularly our southern border — have been flung wide open for anyone to pour into the country.

Let’s review what just happened along the border with Mexico near Del Rio, Texas.

Thousands of Haitians congregated under an international bridge. They were fleeing corruption in their country as well as fleeing the destruction brought by a killer earthquake.

Texas Gov. Greg Abbott deployed Department of Public Safety officers to the border to assist Customs and Border Patrol agents in managing the chaotic scene. U.S. Department of Homeland Security officials were on it, too.

Now the crowd is gone. The migrants have been sent back to Haiti, sent to third countries or are being processed to achieve legal immigrant status.

Is that a signal that we have an “open border”? No. It isn’t!

Our borders are no more “open” than they have been during the terms of Donald Trump, Barack Obama, George W. Bush, Bill Clinton, George H.W. Bush, Ronald Reagan, Jimmy Carter … I’ll stop there.

Yet the critics of Joe Biden seize on the chaos brought forth and are offering the canard about “open borders” as a weapon to use against him. One of those critics, former Housing Secretary Ben Carson, writes in Newsweek, “We are encountering more people at our southern border than any other time in the last 21 years. Two months in a row, the numbers exceeded 200,000; in August 2021, the numbers represented a 317 percent increase over August of last year.”

Biden Has Effectively Opened Our Border. He Is Once Again Vindicating Trump | Opinion (msn.com)

OK, Dr. Carson. How are they responding to that influx? We aren’t just letting ’em pour in, doc! Get a grip here.

Yes, the Biden team needs to do better. Yes, they need to make their response more efficient. And, yes, we cannot tolerate the sight of mounted CBP officers herding Haitians like cattle as they seek shelter from the misery they are fleeing.

However, the border isn’t “open.”

One thought on “Our border isn’t ‘open’”