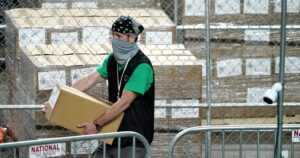 The so-called audit of Arizona’s election returns in 2020 have delivered a stunning blow to the former Liar in Chief: The Cyber Ninjas have determined that Joe Biden won Arizona’s electoral votes in a fair-and-square vote.

The Cyber Ninjas is the civilian group charged with combing through the Maricopa County returns to find enough votes to overturn the Arizona results, which Biden carried narrowly in November 2020.

But … what do you know? Cyber Ninjas — with zero election audit training in its background has determined there was no fraud in 2020 and that President Biden’s vote totals hold up.

To be fair, I cannot imagine what my response would be had the Cyber Ninjas had reached another conclusion. I might go bonkers, bananas. I might be bumfuzzled, bamboozled and bombarded with emotion.

I am left now to wonder if the Cyber Ninjas had taken the criticism of its lack of credentials to heart. Might it have just tossed in the towel and delivered a summary that it knew would be palatable to those of who knew what was obvious from the get-go? That President Biden’s victory in Arizona, while not overwhelming, was sufficient to stand up under close scrutiny.

I won’t offer a full-throated cheer to what the Cyber Ninjas have decided about the returns in Arizona. Its effort to overturn an election was a monumental waste of time and money. Perhaps, too, these findings will fill officials elsewhere with courage to stand up against The Big Lie.