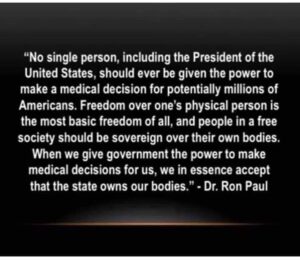 Ron Paul, a former member of Congress from Texas — and one-time Republican presidential candidate — has made an intriguing and likely unintended case against a hideous Texas law that essentially outlaws abortion.

Paul is a physician and is the father of a sitting U.S. senator, Rand Paul of Kentucky. This item showed up on my Facebook news feed.

I’ll venture a presumption that the statement is intended to refer to President Biden’s mandates to require vaccinations against the COVID-19 virus. Think, though, about the overarching message contained in the statement attributed to Dr. Paul.

“Freedom over one’s physical person is the most basic freedom of all and people in a free society should be sovereign over their own bodies.”

Therein lies the most essential argument possible against that Texas law that has become the subject of lawsuits seeking to overturn it. The Legislature passed the law that Gov. Greg Abbott signed that prohibits women from obtaining an abortion after being pregnant for six weeks. Many women — arguably most women — don’t even know they are pregnant six weeks after conception. The law’s intent is to take the teeth out of the landmark Roe v. Wade Supreme Court ruling that legalized abortion in January 1973.

Let’s be clear about something. This law will not prevent abortion. Women will continue to terminate pregnancies. Many of them might seek “back-alley” procedures that could do them terrible physical harm. The law is ghastly and it is the product of ham-handed legislative tyrants who seek to exert control over women and the decisions they make regarding their own bodies.

Ultraconservative legislators have seized the moment in Texas with this legislation. They have gotten their way, at least for the time being. The state, however, does not “own our bodies.”