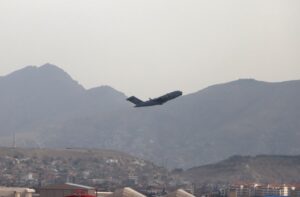 Say whatever you wish about the end of the Afghan War.

That we can declare an end to our fighting there is in itself a moment worth saluting. Our longest war came to an end this morning when the last C-17 transport jet took off from Kabul airport, cleared Afghan air space and we declared an end to our evacuation of all U.S. citizens and allies who wanted out.

I have said since we went to war in Afghanistan 20 years ago that there could be no way for us to “declare victory” in the way we were able to do, say, at the end of World War II. Our military brass accepted the terms of surrender of enemy forces in 1945; the fighting stopped and we danced in the streets from coast to coast.

There would be no such celebration after the Korean War, certainly not after the Vietnam War, nor after this war.

Indeed, our war against terrorism is likely to persist, but without the hackneyed “boots on the ground” fighting a cunning enemy.

I will stand with President Biden’s decision to end this war. He knew what his three presidential predecessors — George W. Bush, Barack H. Obama and Donald J. Trump — couldn’t understand. It was time to end a war that had gone badly not long after it started in the wake of the 9/11 attack.

President Bush went to war after 9/11 intending to rid Afghanistan of the Taliban government. He succeeded. He vowed to get the men responsible for the attack on New York and Washington. That task fell eventually to Obama’s national security team that killed Osama bin Laden in May 2011. Trump’s team got the leader of the Islamic State.

One thing remained constant. The Afghan War kept on going.

Joe Biden took over in January. He assessed the return on the investment we were getting in Afghanistan and determined it was time to end it. Now! So … he did.

Those who write the history of this big day will need time to evaluate all the nuance attached to it. I am going venture out on that limb and presume that history will look more kindly than President Biden’s critics are viewing this landmark day in real time.

It’s over. Thank God in heaven!

One thought on “It’s over … finally!”