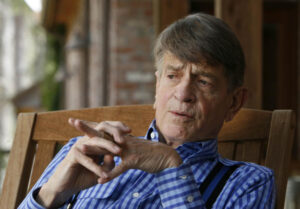 If you say “Good Time Charlie,” or just plain ol’ “Charlie Wilson,” then we’re talking. I am thinking of Charlie Wilson today as the nation watches its longest war end in Afghanistan.

U.S. Rep. Charlie Wilson was a Texas Democrat and a bona fide expert on Afghanistan, its politics, its people and its struggles against foreign powers. He died in February 2010 and is buried in Arlington National Cemetery.

I knew Wilson because of my work from 1984 until 1995 as editorial page editor of the Beaumont Enterprise. Wilson represented the Second Congressional District, which at the time included vast stretches of Deep East Texas territory where the newspaper circulated. Thus, he was one of our sources for issues relating to Congress. He and I knew each other well. I respected him greatly; I hope he thought well of the work I did on behalf of our readers.

Before he died, and before he retired from Congress in 1996, Wilson spent much of his career in public life seeking federal assistance to fighters seeking to rid themselves of Soviet domination of Afghanistan.

Wilson rode donkeys through the Khyber Pass with fighters who — regrettably — became the precursors to al-Qaeda. They were called the mujahadeen. They wrote a book and later produced a film called “Charlie Wilson’s War”; indeed, Wilson told me he was thrilled to be portrayed by Tom Hanks in the title role.

In the days after 9/11, I called Wilson at his East Texas home to get his reaction to what happened to us on that terrible day. We spoke for a long time over the phone and Wilson warned me at the time that we were in for the fight of our lives if we chose to go to war in Afghanistan. He knew of which he spoke. He sought congressional aid for the fighters doing battle against Soviet soldiers who invaded their country to prop up the Marxist government.

What might he say about the end of our war in Afghanistan? I am guessing he wouldn’t be shy about saying something like: I told you so. I told you it would be a hard fight. I told you that the Taliban wouldn’t just surrender and disappear from face of the planet.

Charlie Wilson wasn’t particularly bashful about imparting the knowledge he accrued over his years in Congress. I bear him no ill will. As far as Afghanistan is concerned, Rep. Wilson earned the right to rub our noses in it.

One thought on “Recalling an expert on Afghanistan”