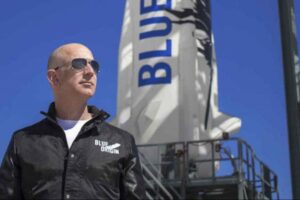 Sir Richard Branson and Jeff Bezos have flown to the edge of space.

I have heard a bit of chatter in recent days over whether these two zillionaire business moguls are astronauts now that they have “slipped the surly bonds of Earth,” if only for a few minutes.

I’ll go with “no.” They are not astronauts. They are rich guys who hired space professionals to do the heavy lifting. They were merely passengers aboard their respective ships.

The others? I’ll give Wally Funk — the 82-year-old female test pilot — a pass on the astronaut claim. She flew on Bezos’s mission alongside Bezos and two others. She had trained to fly as an astronaut in the early 1960s; then NASA killed the woman in space program, denying Funk the chance to actually fly into space.

I once got into a snit (one of many) with a critic of this blog, the late Andrew Ryan, over my dismissal of U.S. Sens. Jake Garn and Bill Nelson, who flew aboard two shuttle missions. I declined to consider them astronauts, even though they trained alongside the space pros with whom they flew. I’ll concede that Andy Ryan was right and I was wrong about Garn, a Utah Republican and Nelson, a Florida Democrat.

Oh, and what about the third U.S. senator to fly on a shuttle mission? You’ve heard of this guy: John Glenn, an Ohio Democrat. He flew as a Mercury astronaut in February 1962, the first American to orbit Earth. Thirty-six years later, he took part in a Discovery shuttle mission.

Two very cool things about Glenn’s shuttle flight need mentioning. One is that NASA’s other astronauts did not need to translate the language they spoke while training with Glenn; the great man was fluent in astronaut-speak. The second aspect of the launch was when the shuttle’s engines ignited and the ship lifted off, the public address announcer declared the launch of Discovery carrying “six astronaut heroes and one American legend.”

Bezos and Branson may be legends in their own minds. Neither of them is an astronaut.

One thought on “Are they astronauts? No!”