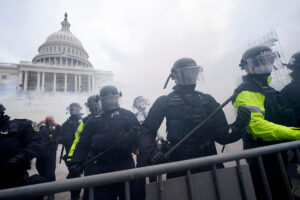 Adam Kinzinger is going to join another courageous Republican on a select congressional committee with the aim of finding out what the heck happened on Jan. 6 when the Insurrectionist in Chief egged on a mob to storm the Capitol Building.

Kinzinger is one of a handful of Republicans who voted to impeach the ex-POTUS for that act. Another Republican House member, Liz Cheney, also is serving on the committee selected by Speaker Nancy Pelosi.

GOP House leader Kevin McCarthy blames Pelosi for politicizing the process. Hah! McCarthy needs to check his defiance at the door and ponder something.

Congress had the chance to select an independent bipartisan commission to examine the Jan. 6 riot. Republicans in both legislative chambers balked. They refused to appoint the commission. So this is what we get: a select panel chosen by a Democratic House speaker.

Pelosi vetoed two of five GOP House members McCarthy selected: Jim Jordan and Jim Banks. McCarthy’s response then was to yank the three who made the cut from the committee.

So … Pelosi is now moving ahead. She has a bipartisan select committee getting ready to do its work.

The insurrection of Jan. 6 was an unprecedented event. The mob of terrorists sought to overturn the results of a legal, free and fair presidential election. The committee will want to get at the root of what caused the riot and presumably seek ways to prevent a recurrence.

Reps. Kinzinger and Cheney believe in the rule of law. They are faithful to their oath to protect the Constitution, unlike most of their GOP colleagues, who proclaim their fealty to the ex-Moron in Chief.

I am looking forward to watching this committee slog through its task to reach a conclusion based on the evidence it will receive.