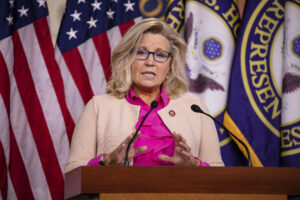 It is no secret to those who read this blog that Liz Cheney drives me batty.

The congresswoman from Wyoming is among the most conservative members of the House of Representatives. Her Republican credentials are impeccable, as she comes from a family led by a former defense secretary, congressman and vice president of the United States.

I didn’t support her decision to run for Congress; I believed her to be a carpetbagger, as she never spent much time in the state she now represents.

But, man, she is showing some spine, guts and conviction in standing against a president who sought to subvert the U.S. Constitution, is still seeking to overturn a free and fair election and has been the voice of idiotic demagoguery from the moment he became a politician prior to his run for the presidency in 2016.

Cheney voted to impeach the ex-POTUS. She stands foursquare on the oath she took to defend the Constitution. Rep. Cheney now is the lone Republican to join a House select committee that is going to examine the consequence of the Jan. 6 insurrection that the former POTUS incited.

House GOP leader Kevin McCarthy threatens to strip her of committee assignments. Liz Cheney continues to stand firm. To which I say … you go, Liz!

Rep. Cheney is taking a stand against blind fealty to a cult leader. She said the integrity of our democratic process is far more important than any loyalty she might feel toward any human being.

I am proud of the stand that Liz Cheney is taking on my behalf and on behalf of the country she took an oath to serve. Her oath makes no mention of any loyalty to a disgraced ex-president.