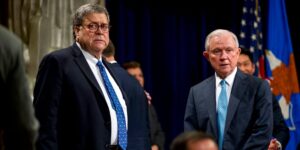 Former attorneys general Jeff Sessions and William Barr say they were “unaware” of any effort by the Justice Department to snoop into the records of key congressional Democrats during the administration of the individual they both served.

Hmm. I believe they need to be summoned to Capitol Hill and forced to testify under oath that they are telling the truth.

We have a case here of a president flouting the rule of law, of ignoring the separation of powers, of intimidating his political adversaries. Sessions and Barr contend they weren’t party to anything of the sort.

I do not believe them. Nor do I discount the reporting of major media outlets that the ex-president ordered the Justice Department to dig up dirt on House Intelligence Committee Chairman Adam Schiff and his Democratic colleague Eric Swalwell.

We have a reprehensible example of a president not caring one damn bit about the oath he took to protect and defend the Constitution.

There needs to be a full accounting of who know what and when.

Bring the ex-attorneys general to Capitol Hill and make ’em tell the truth about what the heck happened during their time on duty.