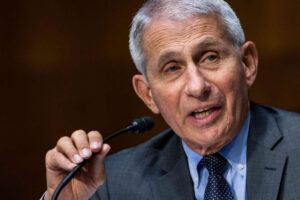 The GOP believes it has discovered a potentially mortal self-inflicted wound on the nation’s top infectious disease expert. It wants Fauci fired from his post as President Biden’s chief medical officer.

Why? Because of emails that have revealed that Fauci has changed his mind on the impact of the COVID virus and the effect of mask-wearing, which Fauci once dismissed as ineffective.

He has changed his mind about how to combat the killer virus. As if that’s a firing offense! You must be joking. Sadly, many among the GOP congressional caucus aren’t offering laugh lines. They want Fauci fired.

Fauci is firing back at his critics. He says he is “following the science” as it relates to the pandemic that swept into this country at the end of 2019. It has killed hundreds of thousands of Americans and sickened millions more. Did the good doctor know all there was no to know about the virus when Donald Trump brought him on board to help craft a White House response to the pandemic? No, he didn’t.

Nor did anyone else.

Fauci took up his own defense while visiting on NBC News with Chuck Todd. As Newsweek reported: “It wasn’t only me,” Fauci told Todd of the advice not to wear a mask. “I’m picked out as the villain. It was the surgeon general of the United States and the entire CDC (Centers for Disease Control and Prevention) was saying the same thing.”

However, Fauci has been singled out by the likes of the QAnon queen, Rep. Marjorie Taylor Greene, as a candidate for imprisonment. Ridiculous! Then again, Rep. Greene’s idiocy is known throughout the country.

When one “follows the science,” as Fauci has done, the journey might take one down a dead-end alley or two. So it well might have happened with the good doctor. This email kerfuffle is being hyped by demagogues.