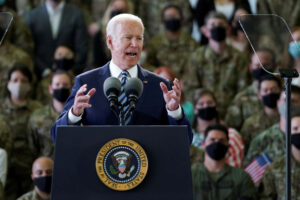 President Biden arrived in the United Kingdom today delivering a message he intends to carry with him throughout his first trip abroad as the leader of the world’s greatest nation.

It’s a simple, but profound, statement: The United States is reasserting itself on the world stage.

I won’t belabor the point that’s been made here repeatedly, that Biden’s immediate predecessor damaged our nation’s alliances and emboldened our adversaries.

Instead, I simply want to extol the notion that the president of the United States is going to speak words of encouragement to our friends while offering words of warning to our foes. That, I submit, is how it should be.

Biden arrives in U.K. to press a message: ‘The United States is back’ (msn.com)

President Biden intends to parlay his intimate knowledge of the men and women who lead the world’s leading economic powers into effective relationships at the highest levels of government. That works for me. It also works for me that the leader of the world’s remaining superpower should speak strongly while admonishing those who would seek to do us harm. That would be you, Russian dictator Vladimir Putin.

Joe Biden is going to speak to the world from a position of immense strength. The nation he leads has turned the corner on fighting the COVID virus; he intends to purchase hundreds of millions of vaccine doses and distribute them to nations around the world. Our economy is reviving at a rapid rate.

The president is not going to apologize for past mistakes. He intends to look forward. That, too, is all right with me.

I have said repeatedly for the past year or so that Joe Biden was not my first pick to succeed Donald Trump. He survived a brutal Democratic Party presidential primary and then thumped the incumbent president in the November election.

He didn’t take office as a novice politician. He is a seasoned hand who knows how government works. President Biden also knows the role that this nation must continue to play on the world stage.

I am heartened that he has pledged to bring this nation back to the center of the world stage where it belongs.