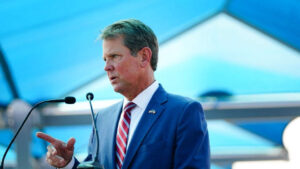 Just how wacky has the Republican Party become in the Age of Trump?

Well, Georgia Gov. Brian Kemp, one of Trump’s strongest allies, got booed when he stood to speak before the George Republican convention. Why were the goober Republicans angry with Kemp? Because the governor wouldn’t force the secretary of state to break the law and “find” enough votes to turn the state from a Joe Biden win to a Donald Trump win.

So, for that the nut jobs have taken their vengeance out on a governor who happens be a Trump ally … but who just couldn’t bring himself to break the law or violate the U.S. Constitution.

This is the kind of goofiness that Republicans are facing as they do battle among themselves, not to mention when they face Democrats in the upcoming midterm election.

Of course, Trump is playing the GOP loyalists like the fools they are for following the dictates of the former Dipsh** in Chief. I mean, the ex-POTUS is even a real Republican, but he has fooled ’em into thinking he is one of them.

They are left now to boo and jeer actual Republican politicians — such as Gov. Kemp — only because they won’t follow Trump’s demands out the window.