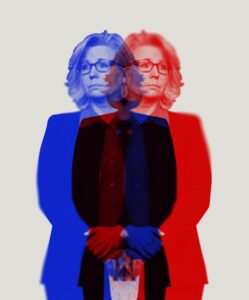 I am cheering for Liz Cheney, a right-wing Republican member of Congress.

She is about to be stripped of her chairmanship of the Republican House caucus because … she is telling the truth about Donald Trump, the ex-POTUS and insurrectionist in chief.

It’s a dark day if you’re a Republican. I am not. I call myself a “good government progressive.” In Texas, in fact, we don’t register as Democrats or Republicans. We vote in open primaries. We get to vote in whatever primary we choose. The election judge might stamp our voter registration card with a “D” or an “R.” Or he or she might not.

Still, I dislike Liz Cheney’s politics. Too right wing for my taste.

However, she ain’t buckling under the pressure of the Trumpkin Corps. She is continuing to speak the cold, hard truth about Donald Trump, that he’s a threat to our government and that he needs to be stopped.

And so, the Republican poo-bas are going to relieve her of her chairmanship because she won’t swill the poison that makes believers of Trump’s Big Lie about the 2020 election being “stolen.”

Indeed, a dark day is going to dawn very soon on the national Republican Party.