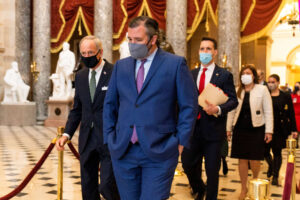 U.S. Sen. Ted Cruz says his effort to derail the 2020 presidential election was not about keeping Joe Biden away from the presidency.

It was about answering “unprecedented amount of allegations” about the integrity of the election.

The allegations all were phony. They were meant to delegitimize President Biden’s election. They were all about the Big Lie that Donald Trump kept fomenting, even after the Electoral College had met and certified the results in accordance with the U.S. Constitution.

Ted Cruz said his election objections weren’t about blocking Biden. Then someone asked about it. (msn.com)

I just am not going to accept any sort of flim-flam coming from the one-time and likely future presidential pretender.