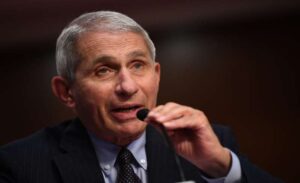 What would that be? It would be the lilt in his voice — and were he to stand and stroll down the street a certain spring in his step.

Dr. Fauci now serves as President Biden’s chief medical adviser. He had the same title (in name only) while working in the Donald Trump administration. The difference between then and now is simple and is as clear as it gets: Fauci is able to speak clearly and bluntly to Americans without being challenged by the president of the United States.

Fauci sought to do all of that while working in the Trump administration. He would tell us that mask-wearing saves lives only to be slammed to the mat by Trump, who at one point called Fauci “an idiot.”

These days? He says the same thing and gets an endorsement for his expertise and receives rhetorical backing from President Biden.

When I watch Dr. Fauci being interviewed by news talking heads I see a man who has been liberated from the heavy hand of a president who refused to let his experts speak for an administration led by a functionally ignorant chief executive.

Anthony Fauci has been set free. He is enjoying being able to speak with candor and with the authority he has built brick by brick over many decades studying diseases just like COVID-19.