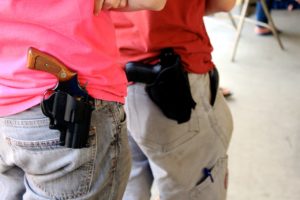 What gives with our elected representation in Austin?

They are charting legislative courses that, according to public opinion surveys, go directly against the wishes of the people for whom they work. That us, folks! You and me! And perhaps even our neighbors and family members.

Here’s a case in point.

The Texas Legislature is moving toward enacting a law that allows Texans to pack heat on their hips — a pistol in the open — without having to undergo a simple course and exam to prove they know how to handle the shootin’ iron.

Legislators, led by the Republican majority, call it “constitutional carry.” So, what do rank-and-file Texans think of it? They are opposed to letting our neighbors pack heat into the grocery store, or to park, or the gasoline service station.

The latest poll from the Texas Tribune/University of Texas says that 59 percent of Texans oppose “constitutional carry” of firearms. According to the Tribune: A solid majority of Texas voters don’t think adults should be allowed to carry handguns in public places without permits or licenses, though the idea is popular with a 56% majority of Republicans. Overall, 59% oppose unlicensed carry — a number driven up by the 85% of Democrats who oppose it. On the Republican side, the gun questions revealed a gender gap. Among Republican men, 70% said they support unlicensed carry; 49% of Republican women oppose that position.

So, my question is this: Who in the hell are the 181 state senators and House members, plus Lt. Gov. Dan Patrick — who runs the Senate — listening to?

If we are to believe the Tribune/UT poll, they ain’t listening to their bosses, those of us who have to live with the laws they approve.