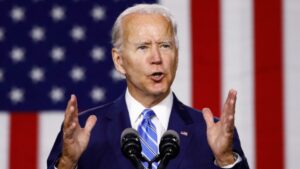 We live in strange times these days.

The strangeness was brought to us in full bluster by none other than Donald J. Trump, who had the good luck (for him) of winning the presidency in 2016. He’s out of office now (which is so very good for the rest of us).

However, I find myself having to defend my support of President Biden, especially when I compare him to Trump. To be sure, there really is no way to compare a seasoned, lifetime politician — and I mean that in a positive way — to someone with zero political skill, which I believe is an essential quality one needs in a president.

I also want to make this point once again. Joe Biden was not my first choice to succeed Donald Trump. However, when he emerged from the huge field of Democratic primary contenders, then I was all in. We needed to get rid of Trump. Which we did in November 2020.

To that end, I am comfortable expressing my pro-Biden bias. I know it’s out there for all to see. I make no apologies for it.

As for Trump, the less I can say about him, the better it is for me. Not to mention for the rest of us, given that he will be off our radar.

3 thoughts on “Why defend myself?”