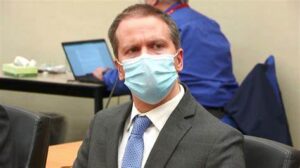 There is no longer any need to hide behind terms such as “allegedly” and “reportedly.”

Derek Chauvin murdered George Floyd this past Memorial Day. A Minneapolis jury this afternoon ruled that the ex-cop murdered Floyd by using unreasonable force to subdue a man who was in handcuffs while Chauvin pressed his knee on the back of Floyd’s neck.

The jury convicted Chauvin of three counts: of second- and third-degree murder and second-degree manslaughter.

I won’t cheer the verdict. I won’t high-five anyone. I am not smiling because a man is headed to prison.

I want there to be further work done to transform police work. Chauvin is a white former cop who murdered a black man. We have witnessed too many of these cases over too many years. It must stop.

What might be the takeaways from this verdict? A couple of them stand out.

President Biden believes we have taken a step toward a “more perfect Union.” Perfection is an impossible standard to reach, as the founders knew. But, yes, we have taken another step forward … or so we all should hope.