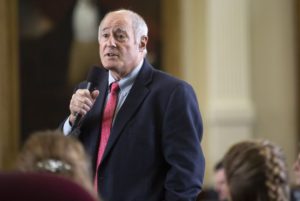 Oh, I do hope a certain state senator reads this blog, as I intend to encourage him to stand firm against a blatantly reckless piece of legislation.

Republican Kel Seliger of Amarillo, a longtime friend of mine, is digging in against a bill that would, if approved, allow any Texan to pack heat even without a permit.

It’s a bit complicated. Texas Senate rules require 18 votes to consider a bill for a floor debate. That means all Republicans need to endorse the legislation. Seliger is balking.

The Texas Tribune reported: On Friday afternoon, one key GOP senator, Sen. Kel Seliger of Amarillo, suggested he may not be immediately supportive of the proposal. He told The Texas Tribune that his office was still researching the issue and he tends to support “just about all” bills related to gun rights, but the “system that we have now works.” He said it was too early to say whether he would block the bill from coming to the floor or vote against it if it made it to the floor.

The system “we have now” requires anyone who takes a brief course on firearm safety and operation and then passes a background check can carry a handgun concealed on his or her person. Yeah, the current system works well. What the Legislature is considering — and which the House already has approved — is a bill to allow anyone to carry a gun.

Lt. Gov. Dan Patrick, who presides over the Senate, said the legislative body lacks the votes to approve the bill, but added that he intends to work to ensure that it makes the grade. That disappoints me, given that in 2017 he expressed concern about the notion of putting guns in the hands of every Texan who wants to carry one.

In a way, though, Seliger’s apparent resistance doesn’t surprise me. Nor would it surprise me if Patrick punishes Seliger in some fashion if the senator digs in for the length of the legislative session. The two men aren’t fond of each other as it is. Hey, I’ll just have to stand with my friend on this one.