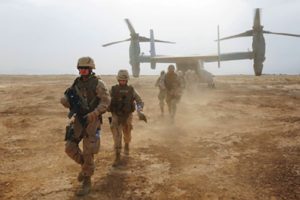 President George W. Bush responded with strength and resolve nearly 20 years ago when terrorists declared war on this country.

He ordered the military into Afghanistan  to overthrow the government that had given the monsters safe haven. The war against international terror had begun.

I said at the time that I wondered how in the world we could declare victory. How could we ever know when we have defeated this enemy? I likened it a bit to the semi-cavalier approach espoused by the late, great Republican U.S. Sen. George Aiken of Vermont who said during the Vietnam War that we should “just declare victory and go home.”

President Biden has in a sense declared victory against the terrorists. He is bringing home the remaining U.S. troops from Afghanistan no later than Sept. 11, the 20th year since the beginning of the longest war in U.S. history.

We didn’t start this conflict, but today Biden declared that we are about to finish this particular phase of it.

My fervent hope is that we remain on the highest alert possible for any future evil intent. I heard the president say that it is time for us to look forward, that the terrorist movement has “metastasized” and moved into many other areas of the world. It is time, he said, for us to focus our efforts beyond the Afghan battlefield.

Joe Biden is not wild-eyed. He does not strike me as being prone to making decisions based on hunches and gut feelings. The president is a studied creature of the government he now leads.

I do hope with all that I can muster that he can remove the relative handful of troops from the field of battle while ensuring that we can remain focused sharply on danger when it presents itself. That we can take a proactive posture against threats to our nation.

We do possess the nation’s strongest military apparatus. A first-rate intelligence service complements that force with seasoned and dedicated professionals. We also have a commander in chief who listens and acts on the advice and counsel he receives from the pros who are trained to deliver it.

Can we truly declare victory on the Afghan killing fields? I hope that is the case.