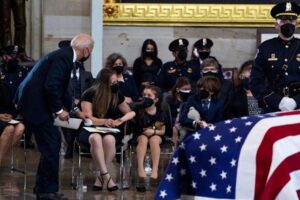 It goes without saying, but I’ll say it anyway.

The nation today saw a display of how our president fulfills an unwritten — but still highly critical — aspect of his job. President Biden stepped up and did his duty as our consoler in chief.

The remains of Capitol Police Officer William “Billy” Evans were brought to lie in honor in the Capitol Rotunda, not far from where he died when a lunatic sought to plow through a security barricade Evans was manning.

Joe Biden stood up and spoke directly to Evans’ mother, the officer’s two children and to the children’s mother. He told us how he feels their hurt, their heartache. How does he know? Because he has buried two of his own children and his wife. He spoke to them — and to the nation in human terms.

President Biden did not speak to that terrible day. He had no need to mention. Instead, he spoke directly to the children of the hero they were honoring and to the nation that continues to grieve over this senselessness.

That is what presidents do.