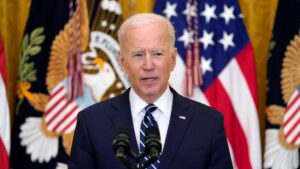 President Biden’s re-election campaign — if it happens — has become a talking point among the political class.

A reporter asked Biden at his press conference the other day whether he plans to seek a second term — and whether he expects to run against Donald Trump in 2024.

Sheesh, man! Joe Biden is 78 years old. He is the oldest man ever elected to the presidency. He said in response to the reporter’s question that he believes strongly in “fate,” which I think might be his way of acknowledging his own mortality. I do not wish that for the president, but, well … you know it might go.

The chatter now involves what a Biden re-election bid does to the Democratic and Republican primary fields.

Let’s see. Donald Trump announced on his first day in office he would seek re-election. Democrats poured onto the primary field in massive numbers; the total hit, what, 22 before they started dropping out. The Hill newspaper thinks a Biden re-election effort could stifle the GOP primary field in 2024, unless the Biden presidency craters between now and then.

I am not going to spend a lot of time wondering or worrying about President Biden’s political future. The political present — a pandemic, immigration, climate change, voting rights — is enough of a challenge for any president.